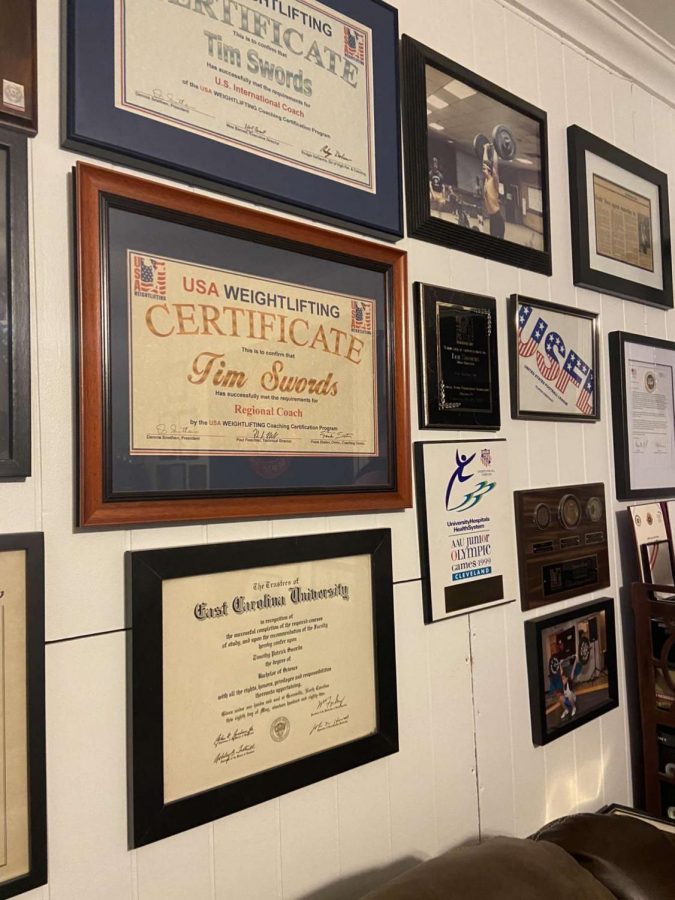 Local legend Tim Swords coaches weightlifting in his garage. He hands various accolades and awards on his garage wall.

Less than two miles from the doors of Clear Springs High School, you’ll probably find Olympic weightlifting coach Tim Swords with his garage door open.  The converted two-car sized garage is home to dozens of free weights, dumbbells, and exercise equipment you’d have to travel to gyms to find. As you walk in, the sight is marvelous.  Weights crash on the floor, as sweat flies from determined lifters with each rep. You’ll likely see a few kids as young as eight years old handling weights with ease.

The League City legend has a media room decorated with Olympic plaques, as dozens of certificates and trophies line the walls.  Sword’s garage is home to war-torn weightlifting mats, which have endured hundreds of kids, teens, and adult athletes through their progress.

The East Carolina Alumni moved to League City in 1976.  Swords is one of Team USA’s certified Olympic weightlifting coaches and is one of the most recognizable names in the profession.

“As I grew up, I continued to learn more about the mechanics of weightlifting and such by training in places like Russia, Ukraine, and other Olympic training centers across the world,” Swords detailed.  “I went on to coach at the World Weightlifting Championship seven times, I’ve coached athletes like Sarah Robles at the Olympics, and American [weightlifting] Championship as well.”

Sarah Robles won a bronze medal in weightlifting during the 2016 Olympics in Rio, having trained and been coached under Tim Swords.  Robles was also the first US athlete to medal in Olympic weightlifting in 16 years.

Clear Springs senior Ryan “Mouse” Knaus has been a regular at Sword’s garage gym for years.

Knaus played football for Springs for four seasons and continued to practice weight-training throughout high school.  “Ryan’s been coming here since he was about twelve, and he works incredibly hard,” Swords said.

Sports have always been an outlet for the youth.  Dreams of being great, or of playing in the big leagues remain a massive inspiration – and Tim Swords fosters those dreams to anyone who walks into his garage.

“Weightlifting is beneficial to any other high-school sport.  We build power. If you’re fast while controlling a barbell, you’re going to be fast on the field, track or court without one,” Swords said.

Kids who train under Swords are determined to be champions someday.  As of today, Swords has helped his high school athletes receive 92 college football scholarships alone.

“I love giving back.  Helping kids and adults get better at something they’re determined to accomplish is what I do.”

Tim Swords is a local legend.  You’ll always find him with his garage open and a welcoming spirit–enthusiastic to train others and give back to his community.