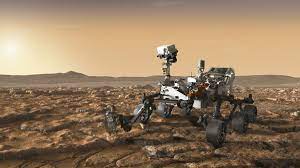 The drone, Ingenuity was sent to Mars with the rover, Perseverance last year. It was sent for the purpose to test drone flight on Mars. The drone was airborne for less than a minute on April 19, 2021.

This is the first powered, controlled flight by an aircraft on another world, Mars. Control was autonomous and was reported though communication from the drone to a satellite then to the Mars Helicopter Base Station. This will allow NASA to be able to explore areas where we cannot use a rover. Since it’s first flight was successful, the next step is to attempt longer flights. The aim is to get an understanding of flying technology on other planets, specifically Mars, and to get to a point where this will be a benefit in the future.

It took six years for the engineers to build the drone. Ingenuity is considered a feat of engineering. It is small, only weighing at around 4 pounds and is only about 2 feet tall by 4 feet wide.

However, for it’s small size it is very smart. Equipped with an antenna, solar panel, senors, and cameras. It can autonomously keep itself warm during the cold nights and charge itself with its solar panels. Information from nasa.gov.