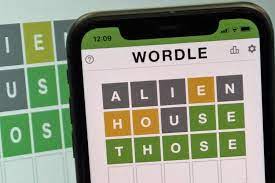 You’ve probably heard about or played the famous game Wordle by now, but if you have no idea what it is, we’re here to explain.

Wordle was created by software engineer Josh Wardle for his girlfriend to play. New York Times Games recently took over the game once it became popular, and now Wordle has accumulated over 2 million players globally. Out of the 203 people who responded to our Instagram story polls, 59% of people said they’ve played Wordle before with 56% saying that they play daily. Wordle, as you may have guessed, is a word game where you have 6 attempts to correctly guess the word of the day. Everyone in the world has the same word and every 24 hours the word resets.

Lots of players have been complaining about the difficulty of recent words. “Tacit”, “bloke”, and “caulk”, were the most common words that players thought were tricky. No matter where you go, you can probably find someone playing Wordle. You can play Wordle on the New York Times website for free daily. Play here.